What it comes down to for a lot of athlete evaluators is this: does the player pass the “eye test”?  The “eye test,” in an overarching statement, is a talent evaluator’s way of dismissing tangible evidence about a player’s ability in favor of his own discernment.  This makes plenty of sense for professional scouts – they can pick up on improvements and flaws that numbers don’t show.  But for the untrained eye, this probably isn’t the best tactic.  The numbers know more than you, and you should stick to those if you can’t properly evaluate players yourself.  This advice comes on the heels of the voting for American League MVP, where a writer who covers the Texas Rangers, Evan Grant, decided to ignore the numbers and use his own personal eye test.

Grant decided this year, as evident on his ballot, that Michael Young of the Texas 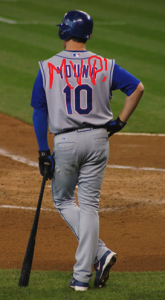 Rangers was the Most Valuable Player in the American League this season.  How did he come to this conclusion?  Taken straight from the horse’ mouth, “I just voted what I thought based on no particular set of criteria, because there is no certain particular criteria for MVP.”  (I’ll ignore that a professional writer used the phrase “certain particular” just because it will send me off the deep end and totally derail the focus here.)  Someone just flat-out saying they did something for no reason shouldn’t elicit this kind of analysis, but it’s the off-season so deal with it.

For lack of a better place to say it, I’ll use this space to say this will not serve as an exercise in explaining the right or wrong ways to evaluate a player.  That’s an unbelievably complex and unresolved topic that I’ll save that to a more prudent time (likely sometime near, you know, baseball season).  Rather, this is an analysis of one man’s opinion, and whether or not he can rationalize his opinion.  Okay, so Grant isn’t really giving us much to work with – how can we get inside his mind?

Ah, here we go! Grant did provide insight into his thought process back in 2008, when he was the only voter to leave Dustin Pedroia completely off his 10-man ballot (Pedroia won the MVP award that season and received 16 first-place votes from the other 27 writers who voted).  After that decision, Grant provided at least a peek into his player analysis tools, citing OBP, OPS, and batting average with runners in scoring position as his main criteria.

So let’s take a look at A) whether or not Grant actually used those guidelines on his 2008 ballot and B) if that blueprint could be used for his 2011 ballot.  The following are his ballots from 2008 and 2011, in the order in which he listed players.  I’ve highlighted the top three on his ballot in blue, and the bottom three in red, and I threw Pedroia into the mix because he deserved to be there on both occasions.

OBP and OPS are what we’re going to focus on here.  Batting average with runners in scoring position is a completely absurd statistic to rely on because it’s entirely contingent on players other than the one you’re evaluating.  Disagree with that?  Well, if you can find an example of a batter in the on-deck circle mind-controlling pitchers into letting the guys in front of him hit better, I guess I’ll have to agree.  Given that, it looks like Youkilis, Quentin, and A-Rod were his only real options in 2008.  Grant clearly didn’t value positional importance in 2008, or else he would have had Mauer ahead of Morneau.  So, no defense, no positional value, and reliance on the guys in front of a player hitting well.  Got it.  He did, however, follow his criteria for the most part.

Flash forward to 2011.  OPS clearly doesn’t matter that much to Grant any more, as his MVP was 14th in that category, lower than every other hitter on his ballot and Pedroia.  OBP didn’t seem terribly important either, as Young was 8th in the AL and 4th out of players on Grant’s ballot alone.  Average with runners in scoring position? Well, at least Young finished second amongst guys on the ballot there.  Again though, that statistic is beyond ridiculous to rely on.  The problem is, if you just look at the rankings alone, it’s an open-and-shut case for Miguel Cabrera being Grant’s MVP.  So Grant threw a couple of other trophies into Young’s case, saying that he deserved it for playing so many positions and for covering while his teammates were injured.  Well, he played those positions really poorly, and if you’re not going to give a player more credit for being on a bad team altogether (see: Bautista, Jose), you can’t just start throwing around awards because other awesome players on a guy’s team were injured.  I probably dismissed both his supplemental arguments for Young too quickly there, but that’s just a testament to how simple those points are to argue against.

I don’t mind that Evan Grant uses criteria that a good amount of baseball fans know aren’t the most accurate.  Sure, I think his method is a steaming pile of trash, but people having different perspectives is what makes the world go round.  What I do mind is that he’s inconsistent.  If those were really his criteria in 2008, Pedroia would have been on that ballot over Pena and Sizemore.  He hasn’t added fielding efficiency or base-running to his evaluation, and he hasn’t evolved his judgment of offensive statistics, so we can only assume he uses the same stats he used in 2008.  He didn’t though.  He used those stats, then brought in some information that should be complete non-factors to justify his submission.  I don’t mind if you feed me garbage, Evan Grant.  Just feed me the same garbage when I ask for seconds, so I don’t have to adjust my palate.