You know when your friend starts talking about a band you’ve never heard of, and you immediately dismiss them because your genre of choice comes from a time period past?  “Sorry, I’m just a 90s/80s/Classic Rock/Bell Biv Devoe kinda guy/gal…I’ll stick with that.”  Well, that’s the beauty of today’s music – all those familiar feels are still being created, they’re just not shoving them all down your throat on the radio because, well, put simply – mainstream radio : music :: sitcoms : comedy.

So in this edition of “what does Mike have blasting through his headphones all day?” I break down 2013 music by genre to make it easier to navigate.  Also, I’m going to write a lot less in this one because let’s be honest – you’re in this for the tunes, I’m in this for the tunes, nobody is in this to see me fumble around trying to explain music and emotions.

To subscribe to my 2013 playlist on Spotify, go here: 2013: Year of the Tunepocalypse

Dance Jams from the 80s 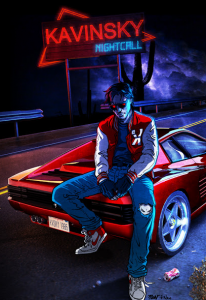 Again, not actually from the 80s, but if that’s your genre then hey, you’re going to eat this up.  I didn’t see the movie Drive until recently, and I had been cautioned that the soundtrack may be a little too awesome.  The song during the opening credits fits perfectly into any movie soundtrack or video game from the 80s or early 90s, and it just recently came out on a full-length album for the first time.  So even though this song’s been out for like, two years now, I’m breaking all my self-imposed rules and putting this out there because it’s too good to ignore.

Oh, and did I mention it’s supposed to be about a guy who was killed in a car accident in 1986 and then came back to life 20 years later as a zombie DJ?  Yeah, that should seal it.

(I don’t know if this is a concept album or not, but I have a serious itch to write the story that would go along with this album and may or may not have already written the outline for it on the bus last week.  Inspiration always strikes on the MBTA, man.)

And if you liked that, here are some more tracks that’ll tickle your fancy, ranked in order of awesomeness.

Rock Your Face Off

I’m putting this in its own category because it rocks too hard for any others.  “But Mike, it’s so slow, what are you talking aboooouuutttt?” I’m talking about the second half of the song, you goof.  Song just rips off its mask and turns into a jam halfway through, and I just wish everyone was this good at music.

So far in 2013, I’ve heard a whole bunch of tracks that sound like they came out in 20 B.M.N. (Before Mike Nelson – the era before Mike Nelson, if you didn’t put that one together. Also, if you didn’t put that one together, just get out.) We’ve got Foxygen running around, who I covered last time, but the tracks below follow right in line.   While the other two are straight out of ClassicRockville, USA, Jesse Dee throws some swank into the mix.  And he’s a local dude. And his hair is on a level yours will never be able to get to.

But really, Unknown Mortal Orchestra’s the one to check out here.  I just got distracted by the hair helmet on top of Jesse Dee’s head for a second. Sorry.

A Little Different, But I Mean, Strings

If you’ve paid any attention to this blog over the past year (and God help you if you have), you know I’m a sucker for strings, so just go with it.  Very, very different applications here though, with MoMS adding them to a catchy indie tune and Apparat just being like “I don’t even know or care what music sounds like in general, I’ll just do my thing and you’ll love it.”  Man’s got a point.  And a violin.  I’m convinced.

Let’s all get together and proclaim this the best song ever because a guy sings on it but wait…WAIT!!…a girl sings on it, too!  I’ve never heard this before except Gotye Of Monsters and Men The Lumineers Edward Sharpe & The Magnetic Zeros The Civil Wars every other popular indie song that comes out.  If you’re one of the sheep that eats that stuff up, you’ll fall for this one, too.

It’s also pretty enjoyable if you aren’t one of those people.

This is a weird category, and I guess the perfect way to end this entry is with a category that makes absolutely no sense.  Again, I have no idea what I’m talking about, in technical terms, but these are slower jams (okay, maybe not Beach Fossils) that just have some really enjoyable riffs in them.  Is riffs the right word there?  I don’t have a clue.  But it’s something people say when talking about guitar sounds, so we’re rolling with it.  Oh, and this first dude was in The Smiths, so I’m sure that sends off 80s music elitists’ radars like Professor X’s mind when a Sentinel hits ground in civilian territory.

Conclusion: I have already forgotten more 2013 songs than you’re going to listen to and it’s March and my God do I need a life.