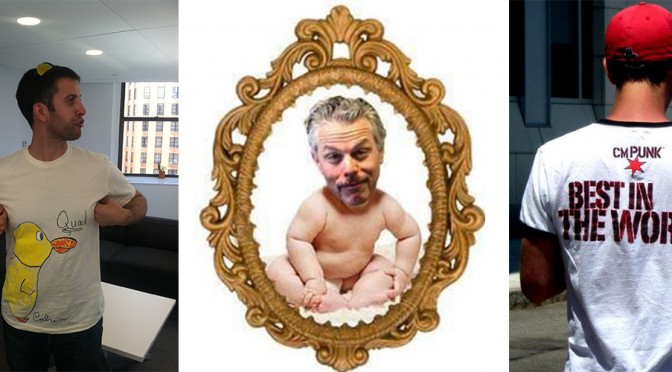 If you or someone you know is constantly searching for new ways to meet people, you’ve probably heard of Tinder. I had heard of Tinder plenty of times before trying it out myself. Tinder’s weird. Tinder’s scary. Tinder’s hilarious. Tinder’s gross. I expected those descriptions to ring true because of other people – weirdos and freaks and the lot – but I never thought I’d be a contributing factor.

One night I was out with some coworkers at a bar that someone brilliantly just installed on the first floor of our office building.  I had recently given in and joined Tinder, as the new dating app’s popularity was reaching its boiling point. There I was, sitting at our table, hard at work smudging my fingerprints left and right across my phone during lulls in conversation, addicted to knowing what attractive girls thought about me.

“Nice picture, which of these 12 people are you?” – I click to see more

Y’see, Tinder is just like an older internet sensation called “Hot or Not,” where you’d be served up a picture of a person and vote on how attractive you thought they were.  Except Tinder’s a lot simpler and frighteningly more tangible.  A pile of pictures lands on your phone, and you basically have three options: “yes,” “no,” or you can look at their profile and more pictures.  If you and the other person both say “yes,” you have the option to message each other and then, well, you do whatever you want with that (they go bowling, Mom, ha…haha…ha…no seriously, bowling).

The pictures that you see are mostly pulled directly from people’s Facebook profiles.  I’m assuming, based on no research, that most people just let those pictures speak for themselves and don’t touch them.  But you have the option to swap pictures in and out and arrange them in decreasing order of appeal, if you so desire. Which leaves the world open to judge and critique the pictures you selected. Sorry, I said “the world,” when I meant to say “me.”

Back to the bar.  My friend is talking about how her roommate saw me on Tinder, and that prompts me to open up my profile (one of the best parts of Tinder is seeing people you know and then panicking on what you’re supposed to do – it’s the online dating prisoner’s dilemma).  I figured while I was in there, I should change my profile around – my pictures could probably be rearranged, and my quote said “Intramural soccer stud,” a line that was pulled directly from a section of my Facebook profile that I apparently haven’t updated since the one weekend in college when I played intramural soccer.

Then I got to the pictures. I figured there would be some goofy stuff in there since I’m not exactly trying to pick up girls on Facebook (that’s what I want you to think, at least).  It just pulled in my most recent profile pictures, and I couldn’t recall doing anything terribly disgusting recently, so I wasn’t too worried.

I see the first one, and yeah, that’s a pretty standard picture of me. Heck, I’d even say that’s a good one in comparison to my usual poses. 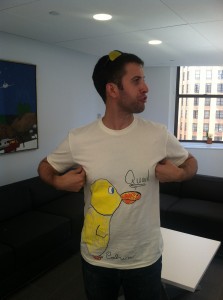 I scroll to the next picture, and I think this one shouldn’t do me too much harm either. It doesn’t have my face, it shows complete disregard for sunscreen, and the professional wrestler aspect could repel a girl or two. But deal-breaker? I don’t think so. 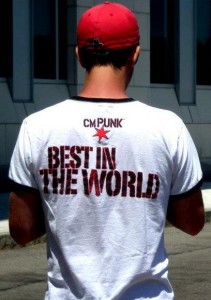 So far, so good.  Now the next picture is probably the best of them all – it’s a nice back-to-back super-macho Charlie’s Angels kind of pose with my brother at our friend’s wedding. Despite having the flu at the time of that picture, I thought it had to be my best to offer – the one that would push all them ladies to swipe right.

This, of course, was before I remembered that I had changed my profile picture on April Fools Day to a picture of my boss’ head on a chubby baby. 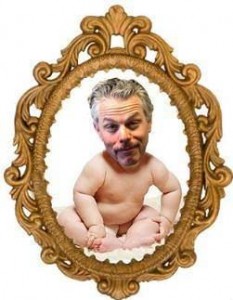 So that was it. That was the third picture girls were seeing when they swiped through my profile on Tinder. My make-or-break picture was a framed chubby baby bobblehead of the head of my department, stolen from our office newsletter. This is the picture girls were using to decide whether or not they wanted to be sexually involved with me.

There’s only one thing that scares me more than that picture itself, and that’s knowing that some girls still swiped right.