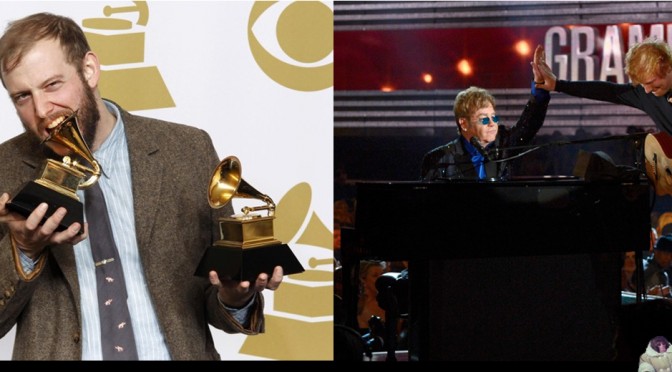 If you have read any of my music lists or recommendations over the years, you’ll know that my taste doesn’t exactly align with the general public.  So when the Grammys come around every year, it’s only natural that I disagree with their nominations.  But it’s not because of the music that I disagree, it’s because the Grammys are a fraud.

I typically only tune in to the Grammys for the performances (unless one of my favorite bands is nominated for best album or something).  I don’t pay much mind at all to the awards that happen before best album because, in case you haven’t noticed, I listen to enough music on my own to decide my favorite albums.  But in 2012 they got my attention through another category: Best New Artist.

Sure, it’s a fine category, and I may care to peruse the list of nominees, but in the end do you really care who wins?  (God, I hope not) Anyway, what caught my attention was the nomination of Bon Iver.

I said, surely butchering the pronunciation.

“But they’ve been around…and had a really successful album before this one. How are they a ‘new artist’?”

Great question, younger Mike’s inner dialogue…because Bon Iver, with their first album, made a pretty sizeable splash.  For Emma, Forever Ago wasn’t an album that slipped through the cracks and became a cult favorite after, like Spinal Tap or dinosaurs.  It was a huge success for a debut (seriously).  A debut that, in the United States, occurred in 2008.  So how, with a 2008 album that landed on a slew of major music publications’ “Top Albums of the Year” list, was Bon Iver eligible for “Best New Artist” for their sophomore album in 2011?

I’ll tell you how.  Because the Grammys have basically no rules when it comes to the “Best New Artist” category.  Oh, they say they have rules.  As a matter of fact, they even laid out the rules on their website:

Public identity?  The heck does that mean?  You’re telling me that Bon Iver being recognized by 12 music publications as one of the top albums of 2008 didn’t establish their “public identity”? OK GRAMMYS. “Guys, we’re like, real swamped here – we can’t get through all these freakin’ albums, there’s like, hundreds of them…and is this even really our job?”  The vague wording of their “rules” gives them carte blanche to give this award to anyone who they decide to give the award to.  Shut up, Grammys.

Actually, don’t shut up yet, I have a few more bones to pick with you about this year’s nominees.  One is a skinny red-headed bone named Ed Sheeran.

“Wait,  Ed Sheeran came out with an album this year?”

Another great question, Mike.  No, he did not release an album in the “eligibility year” that the Grammys established (more on eligibility shortly).  His only album came out in 2011.

“So why is he even nominated?”

I really just have no idea.  And then we move on to the nominations of Kendrick Lamar, James Blake, and Macklemore & Ryan Lewis…

”Wait, wait, wait, I’m not done with this Sheeran thing yet.”

Oh right! He was.  “The A Team” was nominated for “Song of the Year” in 2013.  And it was in the top ten on a whole bunch of charts throughout the year.  And just in general, everyone knew that song.  And HE PERFORMED ON THE GRAMMYS WITH ELTON JOHN HOW ARE YOU TELLING ME THAT HIS “PUBLIC IDENTITY” HAS NOT BEEN ESTABLISHED???

In a blog post on their site, the Grammys actually answer this question about Sheeran’s eligibility…

In Ed Sheeran’s case, he was nominated for songwriting last year, not performing, and so remained technically eligible.

I have to get off this Sheeran thing, it has already driven me closer to insanity than it has any reason to.  So, back to those other three artists I mentioned (I don’t know the other nominee, Kacey Musgraves, and therefore will not say another word about her beyond this parenthetical).  Kendrick, Macklemore and James Blake – are they really “new artists”?

Technically, Macklemore is okay because the album that established him came out on October 9, 2012 – 8 days after the “eligibility period” began.  This nomination just feels overdue because “Thrift Shop” hit the top ten on Billboard’s charts weeks before last year’s Grammys.  And even though the hit single first hit the charts in September 2012, which is outside the “eligibility period,” I’m giving this a pass because I’m too tired to do the Sheeran thing again.  Seriously, that was draining.

But Kendrick – this isn’t his first public rodeo.  On one hand, I kind of understand the Kendrick thing – he really burst onto the scene with Good Kid, M.A.A.D. City, which seems to be one of the Grammys’ selectively-acknowledge criteria.  But he also had two full-length albums before that one.  And, to get into the “eligibility period” thing for a minute, this album came out on October 22, 2012.  That’s forever ago for music listeners.  If music publications had enough time to work that album onto this list and this list and this list and this list and this list to say it was one of the best albums, why can’t the Recording Academy listen to it and vote on it in the additional months they have?

All those lists came out well before the end of 2012.  The Grammys really have no excuse to have the deadline at the end of September and not the end of December.  Keep up with the times, Grammys.  We’re all listening to and judging music as soon as it comes out – you don’t need four months to review the year’s work and vote.  And I guess that’s why this bothers me so much.  If the rest of the music-consuming world is evolving, you need to keep up or risk falling into a pit of irrelevance and being left for dead.

“That was a really dramatic ending, Mike, but you forgot to talk about James Blake.”

Well, I’m not going to end on a better note than that, but sure, let’s talk about James Blake.  Blake, like Kendrick, has been known for a few years now.  His first full-length album came out in 2011 and hit the top ten on charts around the world (except in the U.S., though anyone in tune with indie music knew about him…ahem).  But the kicker with James Blake is that he was already nominated for “Best New Artist” for his 2011 breakout.

“Come on, Mike, the Grammys are buttheads, but even they’re not that bad.”

“Wait, so the Grammys are two years behind the Japan VMAs?”

That’s right. The Grammys, in 2014, are recognizing an artist in the same category as the Japan VMAs did in 2012.  Just writing that sentence made me embarrassed for them.

So here’s an idea, and one that simplifies the heck out of this category.  Let’s limit “Best New Artist” to only artists who released their first album or EP during the previous calendar year (January to December).  Give artists who aren’t already established a chance to break through.  Then again, why make sense when you can make things complicated and foolish?