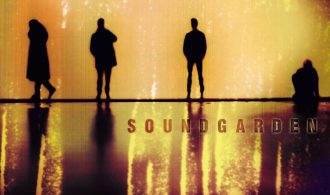 When I first saw an image of Soundgarden, I thought Kim Thayil (far left) was Chris Cornell (mid-left).  I was young. I assumed the the most unique looking band member had to be the front man. It doesn’t make sense now, but it made sense then. 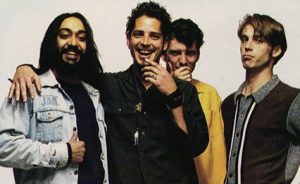 As one of the bands I grew up with, Soundgarden naturally owns some real estate in my brain. They hit me in my formative years. Ain’t no stopping that.

… my first musical exposure to the F-word. “Ty Cobb” was the first song I ever owned that made me nervous my mom would find out about it. I deliberately skipped that track any time there was a chance she’d hear it.

[Video unavailable because hahaha I’m still not going to let you hear it, mom!]

… my first “was that on purpose?” reaction to a song. The last minute and a half of “Blow Up the Outside World” is recanting “blow up the outside” over and over. It’s…it’s fine. Anyway, during the last line, an expected sound happens in the background (5:40 mark) – I think it’s a sneaker squeaking on the recording studio floor. That’s what I assumed as a kid, and I never want that assumption to be altered, confirmed, or denied. Music doesn’t have to be perfect. Not even in the studio. Sometimes, even, it’s better if it isn’t.

… my first “I think I already know this song” experience. I was wrong, obviously, but at the time I was 100% sure “Pretty Noose” was one of their older songs. “Do they put the same songs on new albums, too?” a dumb 10-year-old Mike thought. I’m sure it was just the first single they released, and I had heard it on the radio like a month before I got the album, which is something I wouldn’t know as an idiot child with no concept of time.

…and my first “first note of the next track is now attached to a song I love” moment. We’re sticking with “Pretty Noose” here. The end of the song doesn’t transition into the next track, but there’s a small enough gap between the songs that when “Pretty Noose” ends – no matter if I’m listening to the album or just hear it on its own – my brain waits a second and then expects the opening riff from “Rhinosaur” to start.

Chris Cornell and his voice were gifts to music, and he has stood out and stood the test of time. As many fans are remembering him this week, I know through these seemingly inconsequential little memories, that he’ll be hard to forget.

We’ll go out on my favorite track from the album, my favorite Soundgarden song, and one of my all-time favorites.