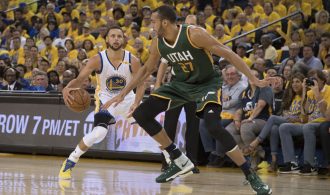 The NBA Finals began last night. I’m actually writing this before the game, but a little writing trick is you can write things as if you’re in the future sometimes. It sounds cooler than it is because it’s the future and God knows it has to be better than the present. Anyway, woo, gonna suppress those thoughts with all the other emotions I bury for a minute. Let’s start this one over.

The NBA Finals began last night, and someone may have flopped or done some weird unnatural motion (the uncertainty is one of the biggest issues with writing in the future from the past). If that happened – rather, when that happens at some point in the series – the band Bag Raiders is going to make a bunch of money from Spotify streams. Rather, a fraction of a bunch of money because I don’t know what streaming pays out any more.

Y’see Bag Raiders is fortunate enough to have their song tied to a meme that has grown into one of the most consistent in the NBA universe. The song, “Shooting Stars,” starts off slow with a simple repeating clap, then explodes into an indie-hipster-dancepocalypse. So in this meme, you’re just watching a clip from a game, and then when that “explosion” (drop, whatever) happens, there’s a player on the screen doing something unnatural with his body, and he gets sent into all kinds of different [pop culture] scenes looping that unnatural motion over and over.

If you read through that last paragraph, you are an absolute saint. If you did not, you can just watch this:

It’s pretty entertaining, and I’m looking forward to whatever the NBA Finals produces for this, as this meme will be dead and gone by the next basketball season. But when I saw it for the first time, I needed to know what that song was. So, I did the super awkward at-work-Shazam, which means putting your headphones into your computer, playing the meme, and having the earbuds funnel into your phone so Shazam picks it up.

Anyway, the song’s pretty entertaining – I missed it when it first came out, but I’m doing my part by having it stuck in my head for days on-end every time a new iteration of this meme is born.  Enjoy the Finals, enjoy the memes. And if you want to keep tabs on NBA Twitter – aka the #1 reason to use Twitter – I have a pretty solid List you can use (click here for that). Or if you want to dive into the origin of the meme – knock yourself out here.

One thought on “Intro Track: That Song From That Meme You’re About to Know (Shooting Stars by Bag Raiders)”